BOOK DIRECTLY IN THE HOTEL AND PAY LESS.

What to see in Krakow?

Krakow at any time of the year delights with the beauty of architecture, the number of monuments and an unusual atmosphere. The multitude of theaters, museums and various cultural events make the capital of Lesser Poland constantly attract tourists from the country and the whole world.

An extraordinary place, the heart of the city - it delights with the surrounding monuments - the most important of them are St. Mary's Church, the Cloth Hall, the Church of St. Wojciech, the Adam Mickiewicz Monument or the famous sculpture by Igor Mitoraj are also obligatory points on the tourist map of Krakow. The seat of Polish rulers, the national necropolis - the Royal Castle located on the hill enchants with the beauty of architecture and rich history. There is a captivating view of the city from the Wawel Hill. Kazimierz is famous for the variety of places where you can eat tasty food and have a good time. The multitude of pubs, cafes and restaurants guarantees that everyone will find their favourite place in this part of Krakow. And what else in the farther or closer distance? And what else in the farther or closer distance? Auschwitz Birkenau was the main and most famous of the six concentration and extermination camps established by Nazi Germany to pursue the policy of the Final Solution, which was aimed at the mass murder of European Jews. It was built in German-occupied Poland, initially as a concentration camp for Poles, later also for Soviet prisoners of war, then also for prisoners of many other nationalities. Rafting down the Dunajec gorge

Is one of the biggest attractions of the region. We can successfully call it an attraction on a European scale. The Dunajec gorge is one of the most beautiful gorges on our continent. The runoff route is 15 km long and the river slopes 36 m. The rafting is organized by the Polish Society of Pieński Raftsmen.buried This is the winter capital of Poland located in the very south of the country in the Lesser Poland Voivodeship, which has been fascinating tourists for years. The resort is located at the very foot of the Tatra Mountains, ensuring unforgettable and spectacular views of the highest Polish peaks. There is a relatively easy road to this winter resort called "zakopianka" Elegant rooms
with the classical style 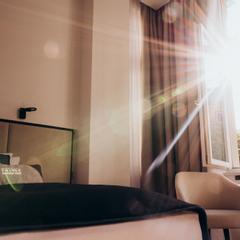 BOOK DIRECTLY IN THE HOTEL AND PAY LESS.